Every home has a stable staple.

A stable staple is an item that is almost, if not always, in an individual’s home kitchen. It varies from home to home and is usually located in an heirloom cookie jar, or a favored Pyrex dish, tucked away on a special shelf in the pantry, or highlighted front and center in the refrigerator. 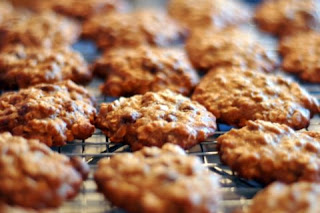 It is the singular food item that is ever-present in that home. It’s usually kept in the same place and it is the one item that is served when someone visits the home and the item that will be there when you visit some else’s home.

Your best friends always know where the stable staple is kept and they feel free to help themselves when they visit.

As a kid I committed to memory all of my friends stable staples. When playing outside in the Mississippi summer heat it was important to know which friends house to visit to eat a certain snack.

One friend always had chips and picante sauce; another had off-brand generic cookies that he would personally dole out— one to each friend— while his mouth was crammed full with a dozen of the cookies. In between those two lived a friend whose parents owned several grocery stores. They didn’t have a lone stable staple, but a treasure trove of snacks, drinks, and frozen treats that we raided on a daily basis. Their pantry was kid-snack heaven. 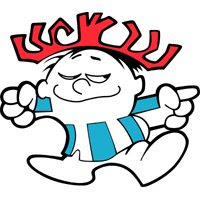 My mom always had oatmeal cookies and Hawaiian Punch in her house. They were her stable staples.

Today, my wife’s stable staple is a pan of warm, freshly baked chocolate chip cookies. My kids love them and their friends annihilate them as soon as they are removed from the oven.

My paternal grandmother almost always had a pound cake under a glass dome. Occasionally she would have an Angel Food Cake, but most times it was a pound cake. Kids don’t get too excited about pound cake. I like it. It’s good. It’s better than tea cakes or scones. But it’s not an iced cake, pie, or cobbler. It’s more of a little-old-lady tea-party stable staple than a snack or treat.

My paternal grandmother excelled when it came to entertaining and serving a large formal lunch or dinner, but when it came to goodies in the pantry, we were left with pound cake topped with strawberries and Cool Whip.

My maternal grandmother always had a Tupperware container of Fudge Cake squares. She was known for two recipes: Pancakes and Fudge Cake. I have written at great length about her pancakes and have actually formed a food products company in which her pancake recipe is sold in mix form all across the country. Her stable staple, though, was Fudge Cake. 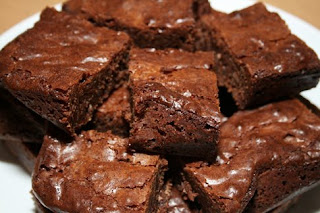 My grandmother’s Fudge Cake was neither fudge nor cake, though it was more closely related to cake than fudge. The recipe was one that probably came from her childhood home of Nashville and followed her to Danville, Ky., Macon and Atlanta, Ga., the Upper East Side of Manhattan, and finally, my hometown of Hattiesburg, Miss.

Fudge Cake squares are more like brownies than cake, but fudgier than a normal brownie. I loved the recipe as a kid and I love eating fudge cake squares, today. Homemade fudge cake might be the coup de grace of stable staples.

Nowadays my stable staple is oatmeal. Not oatmeal cookies— oatmeal— the breakfast gruel that is eaten with a spoon. It’s the item that is always in my pantry, not fudge cake, or pound cake, or even Angel Food Cake— oatmeal. Sometimes middle age and responsibility stinks.

Melt chocolate and butter together in a double boiler. Once incorporated let cool slightly. Cooled chocolate should still be in liquid form.

Mix together the four eggs and gradually and the two cups of sugar until completely incorporated. SLOWLY pour the slightly warm chocolate mixture into the egg/sugar mixture.

Line a pan with waxed paper or parchment. Pour in the chocolate mix. Bake at 350 approximately 30 minutes or until an inserted toothpick comes out clean.