One of the unexpected benefits of writing a weekly food column which is centered mostly around food is that people always give me food. I love my job.

At a book signing earlier this year a man walked up with a flat of blackberries and blueberries. “Here, check these out,” he said. An entire flat! That’s 12 pints. Did I mention that I love my job?

Over a breakfast earlier in the summer my friend Chris brought me a bag of peaches. I love my friends, too.

Peaches are a great gift. I used to go to a local peach orchard near my hometown and buy several bushels of peaches at the height of the summer and deliver them to my friends.

Trust me, there is no love lost between Georgia and South Carolina when it comes to peach production. 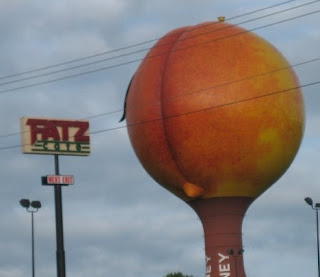 Each state is trying to top the other. Years ago Georgia named itself “The Peach State.” After hearing this, South Carolina adopted the moniker, “The Tastier Peach State.”

These inter-state battles of one-upsmanship can turn nasty if left unchecked. Be on the lookout for Georgia to rework their “The Peach State” motto and name themselves, “The Really, Really, Really Good Peach State.”

Then watch for South Carolina’s counter punch when they adopt the motto, “The Tastier Peach State with Slightly More Coastline than Georgia on the Atlantic Ocean.”

Realizing this, the Georgia Peach Board will go to their state legislature and petition for their slogan to be changed to, “The Really, Really, Really Good Peach State with a Professional Baseball AND Football Franchise.”

South Carolina will then counterpunch with, “The Tastier Peach State with Slightly More Coastline than Georgia on the Atlantic Ocean that doesn’t want a Perennial Losing Professional Football Franchise (and besides the Carolina Panthers are half ours).”

Georgia will then elongate its name to “The Really, Really, Really Good Peach State with a Professional Baseball AND Football Franchise that Doesn’t Have a Compass Point in Our State Name.”

After petitioning for a larger state seal to hold the entire new motto, South Carolina will propose to change their moniker to “The Tastier Peach State with Slightly More Coastline on the Atlantic Ocean that doesn’t Want a Perennial Losing Professional Football Franchise (and besides the Carolina Panthers are half ours) which doesn’t have bad traffic like Atlanta.”

It will finally take a steel-cage wrestling match between Ted Turner and Steve Spurrier to resolve the issue. Turner’s mean as hell, but my money’s on the visor-wearing Spurrier in the third round.

Georgia and South Carolina aside, I am a fan of Chilton, County, Ala peaches. They seem to be the red-headed stepchild of the Southern peach world.

Peaches taste like summer no matter where they’re grown or what’s stated in their home state’s motto.

In a separate bowl, vigorously whisk egg yolks. While whisking, slowly add 1 /3 of the boiled cream mixture. Stir well. Add remaining egg mixture to cream mixture. Return to low-medium heat and continue stirring for 5-7 minutes. Just as it begins to simmer, remove from heat and strain into a bowl set over ice. Add the reserved peach juice. Stir well until completely chilled.